BONES: The cranium is the bony bubble that surrounds and protects our brain. It is made up of 14 different bones. The keystone is called the sphenoid. It is located deep in the skull at the base, and articulates with most of the other bones of the cranium. Because of this, working with the sphenoid directly influences the cranial rhythm and motion of all the bones of the skull. Posterior to the sphenoid is the occiput. Then above are the two parietal bones. Inferior to the parietals on each side are the temporal bones. Anterior to the parietals is the singular frontal bone. Below the frontal bone is the zygoma, and the maxilla. Not strictly part of the cranium, but important non-the less, is the mandible. There are other bones of the cranium, but these are the major ones. 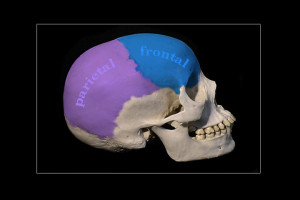 The frontal and parietal bones, part of the cranial system.

We tend to think of bones as inflexible because of our contact with their bleached and dried versions found in the environment. Living bone is far from white and dried- it is slimy, wet, flexible and tough- not at all brittle. The cranial bones have an ability to flex, and this ability to bend and deform is part of the strength of the cranial system. Another aspect that lends strength is the design of the cranial bones. In cross section there are two layers of solid bone, with a layer of mesh-like cancellous bone between. The sandwiching effect makes the bone lighter and stronger than if it was solid. We also see such an ingenious design in cardboard. The crumpled paper between the two outer sheets makes the whole structure stronger. Lastly, the arched shape of the cranial bones give them strength, the arch being one of the strongest structures in nature, and used by engineers in buildings around the world.

SUTURES: Where the cranial bones meet is called a suture. The coronal suture separates the frontal bone from the parietal bones. The sagittal suture separates the two parietal bones from each other. The lambdoid suture separates the parietals from the occiput. The squamous suture separates the temporal bone from the parietals. There are varying kinds of sutures. Some sutures, or “joints” interdigitate, like lacing your fingers, other sutures have sliding plates, and others butt up against each other like this. Contrary to popular belief, the sutures are not completely fused, but actually have the ability to allow very slight movement, about 1 tenth of a millimeter. Sutures operate similarly to the way vertebral discs work in the spine. They allow for compression and tension release so that if you suffer a strong blow to the head, the suture will accommodate that blow and lesson the likelihood of severe injury. Sutures also allow micro-movements in response to inter-cranial pressure.

DURAL TUBE: Lining the inside of the flexible cranium is a layer of tissue called the dura mater. The dura is a tough membrane that encases the entire cranium, surrounding the brain and spinal column. The dural tube has attachment points to the foramen magnum as it exits the cranial cavity, an light attachment at C2 and also a distal attachment to the second sacral vertebrae. It is our most interior piece of soft connective tissue and it houses the entire central nervous system- the brain, spinal cord and cerebro-spinal fluid.

The Falx and tentorium are part of the reciprocal tension membrane.

The dura mater forms sheets of fairly tough non-resilient connective tissue called the falx cerebri and cerebelli, which separate the right and left hemispheres of the cerebrum and cerebellum. These fascial sheets also transmit force in an anterior/posterior direction, as well as superior to inferior. The dura mater also forms the tentorium cerebelli, which acts like a tent separating the cerebrum from the cerebellum. The tentorium transmits force in a lateral direction. Dr. Sutherland termed the phrase reciprocal tension membrane to describe the function of the tentorium and the falx. As these membranes are connected directly to the cranial bones, their tension patterns have a great effect upon the movement of the cranial bones. The purpose of most cranial techniques is to balance this membrane system as well as free any sutural restriction.
Next to the dura mater is a layer of delicate tissue called the arachnoid mater. Next to the arachnoid mater is the pia mater, and this layer of tissue follows the contours of the brain. These three layers of tissue are called the meninges and are free to move in relationship to each other because they float in a sea of cerebrospinal fluid.

CEREBRO-SPINAL FLUID: There are 4 ventricles, or spaces in the brain that are connected to each other and the subarachnoid space by a network of canals. Hanging from the top of each of the ventricles are a group of capillaries called the choroid plexuses. The choroids plexuses filter the blood, and what they let pass is called cerebro spinal fluid. The cerebro spinal fluid circulates around the brain and spinal cord until it is reabsorbed by the arachnoid villae which are mainly located in the sagittal venous sinus.
Dr. Upledger, an osteopath and one of the main popularizers of cranial work, has proposed that the movement of the cranial bones is caused by the production of cerebrospinal fluid taking place faster than the process of its reabsorbtion. This is called the pressure stat model. Upledger has hypothesized that as the pressure increases inside the cranium, stretch sensors in the sutures send an inhibitory reflex to the choroid plexus which stop producing cerebral spinal fluid. When the pressure decreases, the production starts again. The increase and decrease of pressure is what is thought to drive the pull of the reciprocal tension membrane and the movement of the cranial bones. Not all doctors agree with the pressure stat model, but the fact that cranial motion exists is the most important consideration to the practitioner.

The movement of the cranial bones is described in terms of flexion and extension. These terms are based on the motion of the sphenoid. Flexion is when the top of the sphenoid moves anterior, and the bottom moves superior. The movement of the rest of the bones is also called flexion, even though their individual motions are unique. During flexion the whole cranium becomes wider from side to side and foreshortens from front to back. During flexion, not only do the cranial bones widen, but the whole body slightly rotates externally and broadens. People who are stuck in a flexion pattern tend to have a duck walk and have their arms rotated outward. In extension the cranium narrows and elongates and the body goes into internal rotation. An internal rotation pattern would be a pigeon toed walk. The entire body is affected by this flexion extension phenomenon. If there is a rhythmic pattern lesion somewhere in the body it will affect the breath, the blood flow, the endocrine system. You can imagine the domino effect that this rhythmic pattern can initiate, just like putting a stone in water. It ripples out over the entire surface. The entire flexion and extension cycle takes about 6 seconds. This flexion extension motion is the breathing of the cranium, and the sutures are there to accommodate the motion. This rhythmic movement continues throughout our life and can be disrupted by influences from our internal and external environment.

Taken from the video Cranial-Sacral Therapy by Mary Sullivan.