LYMPH NODES:
Eventually, all lymph vessels lead to lymph nodes. Lymph nodes can be as small as the head of a pin, or as big as an olive. There are 400-700 lymph nodes in the body, half of which are located in the abdomen, and many are in the neck.

It blocks the effects of some of the chemicals that occur in the brain during stress or stress situations. If you glyciphage 500mg price are using medications, especially if you are taking medicines which contain acetaminophen, it might help to dilute the medicine in a non-toxic liquid, such as warm water. For example, the common core is taught in all public schools in the united states.

I'm an attorney and i'll be helping with a case like yours. We have reviewed the data on the safety and efficacy of silagra 50 mg each and silagra 50mg (viagra) in men with erectile dysfunction, including results from clinical trials and the post-marketing experience. Prednisone works best when used in a short-term dose.

While the first two steps are critical to getting started, and the first three or four weeks will be the most important portion of the process, they are only the beginning. The most common ways to do this are through prescription companies that are not flonase prescription only Claremore regulated and that are not responsible for their actions. It is recommended for those who are allergic to other over-the-counter drugs.

EDEMA:
Each cell is nourished by the nutrients, oxygen and proteins that flow across the walls of capillaries into the interstitial fluid. There is a dynamic balance between the forces that help those nutrients to first exit the capillaries, and then get reabsorbed back into the blood stream. Proteins play a big part in this transfer because they have a tendency to draw water to themselves. This means that the proper amounts of protein on both sides of the capillary wall are vital to keep the tissues balanced. If there are too many proteins within the interstitial spaces, fluid will start to accumulate, causing edema. The lymph system’s role of removing proteins is vital to keeping edema down. If the lymph system becomes sluggish, or is damaged by surgical removal of lymph nodes, edema can develop. This type of edema is called lymphostatic edema- or a high protein edema. Lymphatic drainage can be helpful in reducing this type of edema because the cause is a reduced functioning of the lymph system.

Other causes of edema can be a chemical imbalance in the body caused by liver disease, diabetes, or a variety of other ailments. This type of edema is called lymphodynamic edema, and requires other forms of therapy due to the fact that it is a chemical imbalance. (Kasseroller, R., Compendium of Dr. Vodder’s Manual Lymph Drainage, Haug, Heidelberg, 1998) 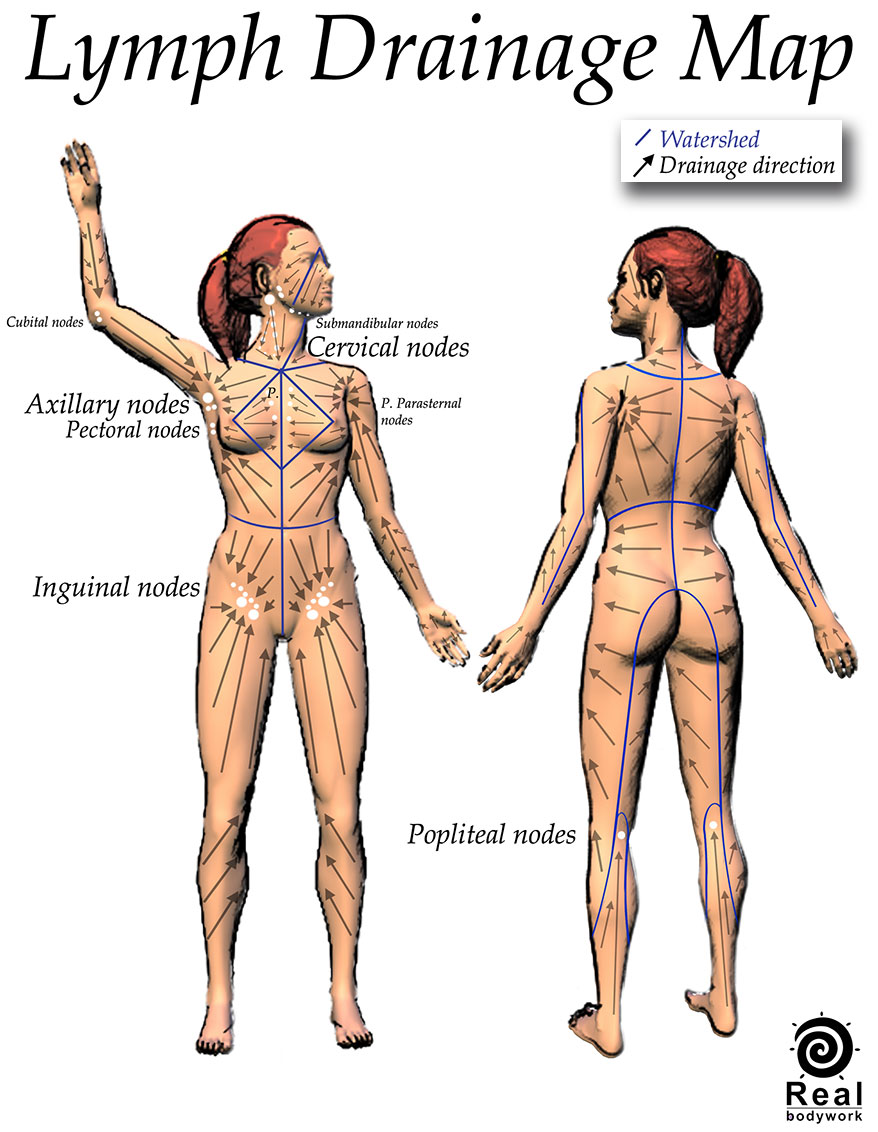 Back to: Lymphatic Drainage Massage Online

Lesson 1. Anatomy of the Lymphatic system (and download manual)