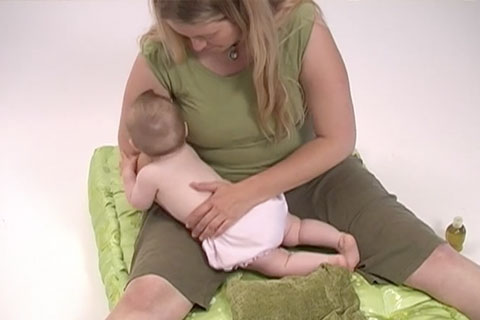 Previous studies have shown that both parents and infants benefit from massage therapy with oil, especially concerning night-time sleep interruptions. A recent study (Field, Gonzalez, Diego, & Mindell, 2016) noticed that almost all of these studies focused on older infants rather than newborn infants. These researchers wanted to not only study newborn children, but their mothers as well.

The study included 59 mothers and their newborns, who were gathered for the study within 24 hours after giving birth. The participants were then assigned to one of three groups: lotion massage, no lotion massage, or no massage. The mothers in the massage groups were trained to give their infants a 15-minute massage, 15 minutes before bedtime, consisting of: five minutes of moderate-pressure stroking of the infant in a prone position, five minutes of moderate-pressure extensions/flexions of the arms and legs while in a supine position, and a repeat of the five-minute stroking. The massage was done slowly and rhythmically, and the lotion group used a lavender scented massage lotion on the infants.

Parenthood is never an easy task, but it appears that massaging a baby with massage oil/lotion close to bed time has significant effects for both mother and child.

The experiment was comprised of 30 college students who were split into two groups, the responders and the nonresponders. Each participant received 21 minutes of massage, consisting of three techniques: local pressure temporalis technique, sustained pressure thoracic technique, and sustained pressure sacrum occipitalis technique. Short-term HRV, blood pressure and heart rates, and saliva flow rates were measured both before and after the participant received the massage therapy.

Responders’ Heart rate variability and salivary flow rates improved following the massage therapy, whereas blood pressure and heart rate did not change significantly for either group. The researchers write, “Our results in the present study support the use of massage as a potential preventive strategy to improve the post-stress immune response in susceptible populations.”