Over two million people worldwide have multiple sclerosis (MS), an incurable disease that affects the central nervous system. The severity of symptoms vary for each affected person; however, the disease has the capability of becoming disabling, with some patients unable to walk unassisted. When the symptoms do occur, many MS patients have difficulty carrying out daily tasks and functions, which can affect their perceived quality of life. Some of the most common symptoms of MS include fatigue, pain, and spasticity. Spasticity is an abnormal increase in muscle tone and stiffness, which may cause difficulties with speech and movement, as well as pain.

Patients of MS must undergo treatments when symptoms occur, such as physical therapy and/or medications. An issue with MS treatments is the cost associated with these treatments, as well as side effects stemming from medications. Thus, it comes as no surprise that almost a third of MS patients use massage therapy in conjunction with their standard treatments to alleviate symptoms. Backus, Manella, Bender, and Sweatman (2016) recognized this trend and its lack of supporting empirical evidence, and thus decided to test massage therapy’s efficacy with a pilot study.

This pilot study used a total of 24 participants with a nonrandomized, pre-post design. The study lasted for a total of six weeks, with participants receiving a massage every week. The researchers measured for: fatigue, pain, spasticity, and perceived health and quality of life. These measures were taken at the beginning and end of the six weeks.

The massage provided included a combination of effleurage, petrissage, friction, and static compression strokes. A more detailed table of the massage, taken directly from the article, is provided below. The massage lasted between 30 minutes to an hour. 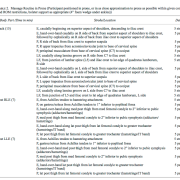 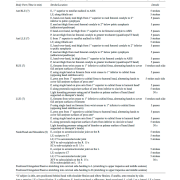 Massage therapy proved beneficial in most of the researchers measures. Fatigue and pain decreased significantly after the six week massage program. Fatigue scores decreased 4.08 points, from 12.0 to 7.92. Pain also decreased 4.54 points, from 18.46 to 13.92. While there was a small improvement of spasticity, the increase was not significant. The researchers explain that a massage more focused on affected muscles might prove more significant. They also note that taking measurements immediately after the massage may provide different results.

This study does provide a foundation of solid, empirical evidence detailing benefits of massage for patients of MS. The researchers note that treatments for MS can be quite costly, especially since these costs can accumulate into large sums over the span of a lifetime. Also, many treatments do not provide patients with adequate relief from symptoms. Medications may help treat symptoms further, but many of these medications come with unwanted side-effects. An example may be the use of opioids for the treatment of pain – many of these medications can become addicting, especially when used long-term for chronic pain. Taking these into consideration, massage as a supplemental therapy seems entirely reasonable.

While the study is only the first stepping stone of many, it seems that massage therapy truly provides safe and effective relief, both physically and mentally, to those with MS.

Finding time to yourself is becoming increasingly difficult in a chaotic, non-stop world of juggling family, work, childcare, and finances. It is important to alleviate this stress and maximise the quality of ‘down time’ we have.

Massage, good for the body, mind and soul…

With experts quoting up to ninety percent of disease having links to stress, it is important to minimise this wherever possible. Massage has therapeutic benefits as well as a targeted treatment in the form of physiotherapy massage to alleviate pain and assist with rehabilitation from injury.  Massage really can be key to a better body and mind state.

So, how can massage help me?

Over a prolonged period, regular massages can have an excellent impact on lowering stress levels and improving sleep patterns, therefore improving mood and emotions. Massage can ease discomfort and can help your skin glow with health. Incorporate bodywork into your health and wellbeing plans and book in for a massage to relieve the pressure!

This post was offered by Jon Reyes from Clearwells, Jon is an expert writer in the health and fitness niche and has been writing and studying topics like this one for over 10 years.